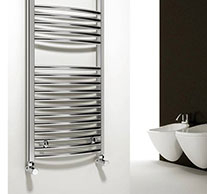 A guide to choosing your Heated Towel Rail

A standard heated towel rail or towel radiator is designed to be plumbed in to a central heating system like any other radiator in the house. These are the lowest priced type of towel rail both to buy and to run however they do only run when the central heating system is on, so if you require the towel rail to work in the summer then this is not the best option. When purchasing this type of rail you must make sure you buy valves as well as they are generally sold separately.

With the standard plumbed in heated towel rail you also have the option to purchase one with an additional electric heating element. If you choose this option they then become dual fuel so can be used as part of the central heating system but also independently from it as well.

1. Will the towel rail be your bathrooms only heat source?

If so then you will need to get one powerful enough to heat the whole bathroom as well as your towels. A rough guide to this is 100 watts per square meter.

If you want to use to warm towels in the summer as well as in the winter then you will need an electric or dual fuel rail.

3. What size do you require?

Size is a very important factor if you are planning to heat the whole bathroom. You will also need to consider how much space is available and many towels you want to hang on it.

4. Where is it going to be positioned?

This is especially important if purchasing a plumbed in rail as you will need the pipes from the radiator circuit to be run to the right spot.

There are 3 main styles of towel rail - Designer, Traditional and Ladder. Designer towel rails are the more contemporary modern designs which are better suited to people who want their towel rail to be a focal point of their bathroom and are going for a modern look.

People who live in older style or period properties will probably want a traditional style heated towel rail as this will be in keeping with the general design of their home.

Ladder rails are most appealing to those on a tighter budget or that just want the best price and are not too bothered about the overall look as these are the most basic in design and the cheapest style of rail, the white ladder rails are cheapest of all.

Angled valves are called this as the water flow pipe is across a 90 degree right angle. This means that the pipe enters the valve on one side and the product is connected to the valve on the other with a 90 degree right angle in between. These valves can be rotated to regulate the amount of water flow to the radiator which gives you some control over temperature but not a great deal.

There are 2 main factors that determine the type of valve required. The first is the direction that the pipes are coming from so do they come up out of the floor, out of the walls or run along the wall. Second is how the valves connect to the radiator.

Thermostatic valves are also an option. With these one of the valves also has a thermostatic control so that you can regulate the heat of the individual radiator.
When upgrading a standard plumbed in towel rail to dual fuel or purchasing an electric only rail, an electric element needs to be selected. There are 3 options when selecting this element. The first is a standard or single heat element. These can be very hot so for someone with small children this would probably not be the best option. Secondly there is the option to have a thermostatic element. With a thermostatic element you can control the temperature of the rail with a small dial control which is similar to the type of control found on most toasters. The third option is a digital thermostatic heating element. This is similar to the thermostatic element with the dial however instead of a dial there are plus and minus buttons and an LED display to control the temperature with.

When upgrading a plumbed in heated towel rail to a dual fuel rail T pieces are required to be able to fit an element. This is a T shaped joiner which connects the valve to the radiator also allowing the element to be connected at the same time.

Digital timers are also available for electric and dual fuel rails in 24 hour and 7 day programmable time periods that can be set so that your towel rail switches on at a pre set time. This means that if you would like a warm towel in the morning but don’t want to waste electricity and money by having your heated towel rail on all night you can have your programmer set to come on before you get up in the morning which will mean you have a nice warm towel when you get out of the shower or bath. Timers are designed to fit somewhere between the element and the electrical supply. They cannot however be fitted in the bathroom or close to running water unless they are sufficiently protected by a suitable enclosure.

Heated towel rails are a fantastic addition to any bathroom. Versatile, attractive and developed using the very latest technology, Trade Plumbing’s range of towel radiators delivers exceptional heating solutions in a way that continues to impress bathroom designers, installers and suppliers across the globe. Store and dry your towels at the same time with an immaculately designed product that tops family wish-lists up and down the country!

Developed to make your showering experience as comfortable and effortless as possible, radiator towel rails are a priceless addition to your bathroom. In fact, once you purchase a heated towel rail for yourself, you’ll wonder how you ever got by without one! As well as acting as a handy heater for cold and damp towels, heated towel rails can also subtly warm the air in your bathroom, eliminating the need to switch on larger radiators or units and saving you money in the process (especially during those tricky spring or autumn months when temperatures rise and fall throughout the day). They can be powered using either your primary central heating system, via an electric source or using both methods combined – towel radiators with this functionality are known as dual fuel and are a great option for people wishing to use them sparingly throughout the summer and more often in winter. Whichever kind of product you choose, be sure to hire a qualified plumber or electrician to install it in your bathroom, as they will need to be considering your existing water and electricity supplies to set it up as safely as possible.

Towel warmers and radiators need certain items to function. Valves are the most important feature and there are two types that you may consider: thermostatic and non-thermostatic. A thermostatic valve will control the temperature of the radiator, whereas a non-thermostatic valve will not. Thermostatic valves are mainly installed in circumstances where the temperature is decided in each room individually by the turn knob on the valve. The only other function needed to ascertain the right kind of valve is as to whether you need straight or angled. Most commonly, angled valves are for towel rails with pipe work from the wall, and straight for pipe work from the floor.

Deciding which towel rail radiator to go for could be difficult depending on the existing style of your bathroom. There are a few crucial factors you’ll need to take into consideration when browsing our collection. You’ll need to look at the heat output of the product and assess whether it’ll suit your bathroom, especially if you have a particularly small space to work with. We’d recommend using our online plumbing calculator, which will let you know which rail will work best in your room. The material used to build the product also has a significant effect on its performance. Reflective chrome finishes are a popular choice, whilst brushed steel heated items are a great alternative for customers wanting less of a shine emanating from their radiator towel rails.

There are plenty of heated towel rails out there with distinctively different characteristics, from traditional frames to contemporary designer concepts, including wall-mounted units, chrome materials and stainless steel options. Make a bold statement with sought-after heated towel rails from leading manufacturers such as CH Designs, Reina and Cherished Radiators. These companies work under the philosophy that radiator towel rails are no longer just a functional item in any every day bathroom – towel rail radiators are able to complement every other feature in the room and blend effortlessly into any design concept whilst continuing to heat the space effectively and efficiently. Items are available in a broad range of colours and finishes, so you’re sure to track down towel rails perfect for your needs!