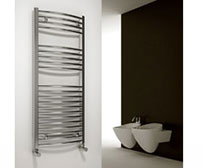 A chrome finish gives your electric towel rail that truly desirable look, and would make a stylish addition to any bathroom. \with a choice of shapes and sizes, at Trade Plumbing you will be sure to find the ideal electric chrome heated towel rail for your bathroom.

There is nothing better to combat those cold morning blues than with a brand new electric towel rail – keeping those lovely fluffy towels nice and warm, and also heating your bathroom to keep you doubly warm when you finally emerge from that delightful soak in the bathtub.

Electric towel rails are fantastically convenient for your home; an electric towel rail does not rely on your central heating system in order to work, instead they are hooked up to your home’s electric system, requiring nothing more than a simple flick of a switch to turn on and heat up the element within the towel rail to heat those towels and keep that bathroom warm.