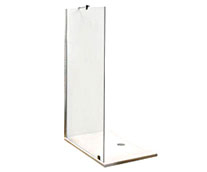 A shower screen is essential if you're planning to install a shower unit above a bath. Over bath shower screens come in many different styles, but all are there for the same purpose - keeping the fast-flowing water in the bath and off the floor.

If you're looking to install or upgrade an over bath shower screen, then Trade Plumbing have a variety of styles available. These include round top, fixed panel, full frame, folding and corner bath screens. The main distinction between them is an aesthetic one, but it's important to install a screen that fits in with the style of your bathroom so it doesn't look incongruous.

When comparing shower screens, consider what would fit best in your bathroom. Some screens are near-permanent in their location, which can make using the bath as a bath tricky, while others can fold away discreetly, only coming out when they're needed for the shower. You should also check the height available above the bath. In some smaller bathrooms, particularly in older houses, a taller shower screen may not be able to fit in the space available, so make sure you've got your measurements correct.

Installing an over bath shower screen is a relatively simple task, though it will require tools and a basic knowledge of DIY. Unless you have existing fittings that can be used by different shower screens, then you'll likely need to drill into the wall, so be sure you know how to locate and avoid electrical cables. A handyman would be able to install a new screen in a relatively short time with not much fuss.