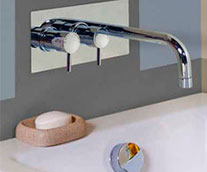 Fabricated with Perfection, Delivered with Love!

Bath Taps and wastes are essential to give the final touch to a bathroom to not only deliver that much wanted and needed water but are also crucial to add the perfect final touch to any bathroom suite. With a huge range of taps, basin taps, bath wastes, hot water taps and more, at Trade Plumbing you are on-the-right-track to selecting a set of taps to wonderfully convey your own unique style and personality.

When buying bathroom wastes: basin, bath or shower wastes, Trade Plumbing is where you search end and your good bathroom journey begins. Shop the item that quenches your thirst for a good bathroom!

Quality that speaks for itself: The Best Bathroom Taps

Every set of taps that Trade Plumbing stock are made of the highest quality possible and are available to suit all budgets, and with our range of taps offering guarantees between 5 and 25 years, you will be sure to enjoy your taps for many years to come…