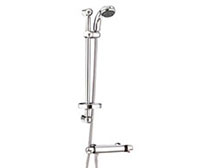 If you're looking to fit or upgrade a shower mixer system, then there are a large number of options available to you. Shower mixers are the simplest form of shower system, using your regular water supply and not needing any extra pump or power supply. Hot and cold water is combined through the shower mixer valve and then sent along a hose to the shower head which can either be loose or, more commonly, attached to a rail on the wall. Shower mixer valves can be used as part of a freestanding shower unit, or combined with regular taps for a combined bath and shower.

One of the most popular forms of shower mixer is the bar system. This is normally used as a standalone, but can be combined with bath taps. The bar is fixed horizontally on the wall with a control at one end to control the amount of water coming through the shower and a control at the other to control heat. Some bar shower mixer valves also come equipped with safety buttons that stop water above a certain temperature or pressure being dispensed, cutting the risk of injury.

Shower mixers are also available in concealed style, where the shower mixer valve and workings are hidden in the wall and only a simple control panel is visible. These are normally used for standalone systems and are available in a variety of styles, so there's sure to be one that will match your bathroom, be it traditional, contemporary or minimalist.

A shower mixer can also be combined in one unit with the taps for a bath. This can be a good solution when there's not the space for a separate shower unit. Again, many styles of combination shower mixers are available, which will enable you to find something that looks good in your bathroom. Some shower mixer valves and taps are in a very traditional style - but with fully up-to-date functions! - while others are in a contemporary or minimalist version.

Upgrading an existing shower mixer valve could be done by someone with lots of DIY experience, but installing from new, or changing to something very different may be best done by a qualified plumber. However you do it, buying your shower from Trade Plumbing means you'll get a wide choice of options at a low price.